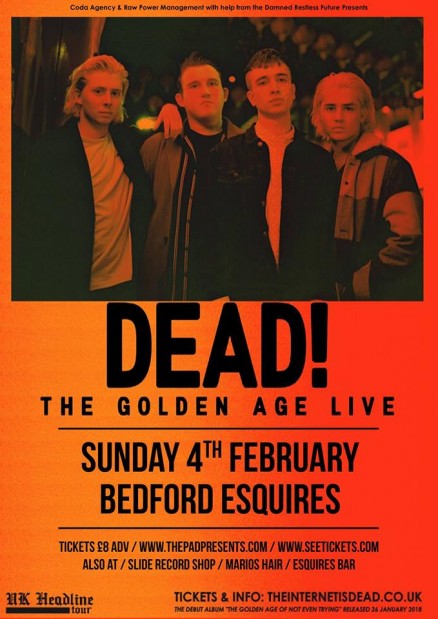 Want hotly tipped on your hands? Well they don’t get much hotter than DEAD! – Coming to Esquires Main Stage on Sunday 4th February as part of their debut album tour.

“There’s blood, sweat, arguments, defining moments and some of the best and worst times of our lives in this album. But every band should have that in a debut record.”

The Golden Age of Not Even Trying is the proud product of four fiercely focused people in their late teens and early 20s. Recorded with producer Charlie Russell at Dean Street Studios in Soho.

With the announcement the band also release a music video for the next single and title track from the album. The band had the following to say about the video “We all live in The Golden Age of Not Even Trying whether we like it or not. That means many different things to different people and we used that in the creation of the video. Parts of it are of us performing and parts of it are of everyday life that we take for granted. We never stop to realise that all the decisions we choose to either take or neglect have an impact on the bigger picture of us as a society.” With a fire in their belly that has seen them tour, no frills, non-stop over the past 18 months, move into a house in London together, release their own music, make their own videos, design and print their own merch, they are without doubt one of the UK’s most exciting new rock’n’roll bands.

Tickets are £8 advance Tickets are on sale Monday 9th October 9am from Seetickets online and in person booking fee free from Esquires Bar, Slide Record Shop and Mario’s Hair Design

This is a 14+ ages show, under 16’s to be accompanied by an adult Full support line up to be announced.