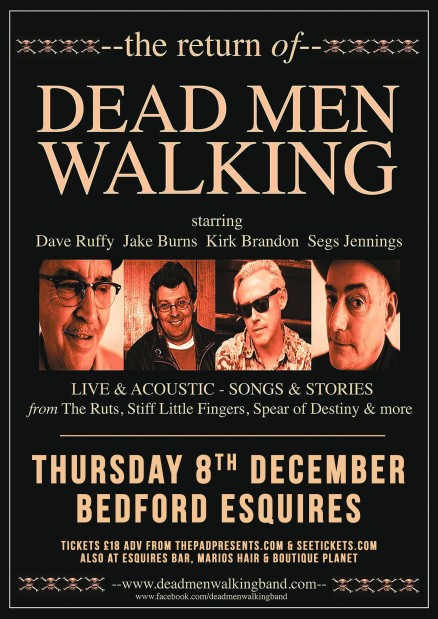 After almost a decade away from the UK clubs, Dead Men Walking return for the second leg of their UK tour this December!

Founding member Kirk Brandon (Spear of Destiny/Theatre of Hate) will be joined by much heralded rhythm section Segs and Ruffy from The Ruts on acoustic bass, percussion and vocals. Jake Burns, legendary front man of Stiff Little Fingers, will be ‘Flying The Flag’ for Northern Ireland.

With a massive catalogue of songs to choose from, this new Dead Men Walking line up intend to deliver a raw stripped back interpretation of a whole host of classic tracks from their respective iconic albums and singles. A few surprise cover versions and even a brand new song or two are also threatening to make their way into the set.

Some of the classic tracks that the artists have recorded between them that made the set on the recent tour earlier this summer included: Staring at the rude Boys, Alternative ulster, Never take me alive, Nobody’s hero and Babylon’s Burning.

No stranger to Bedford Stiff little Fingers packed out the Bedford Corn exchange twice in recent years and Ruts Dc smashed the same venue when opening for Neville Staple in 2015. Kirk Brandon of course has been a regular fixture at Esquires over the years with both Theatre Of Hate and Spear of Destiny and this is the first time we welcome Dead Men Walking to the venue.

The venue will be set up with 50 unreserved seats towards the front of the venue on a first come first served basis with standing to the rear and around the sides, as a result the capacity is somewhat reduced at the venue and we expect to sell out quicker than a normal show of this stature so an early purchase of tickets is advised.

Tickets are on sale now from Seetickets priced £18 advance and can be bought in person from Esquires from Friday 30th September and the other outlets of Planet Boutique in the Arcade and Mario’s Hair Design in Kempston from Tuesday 4th October.