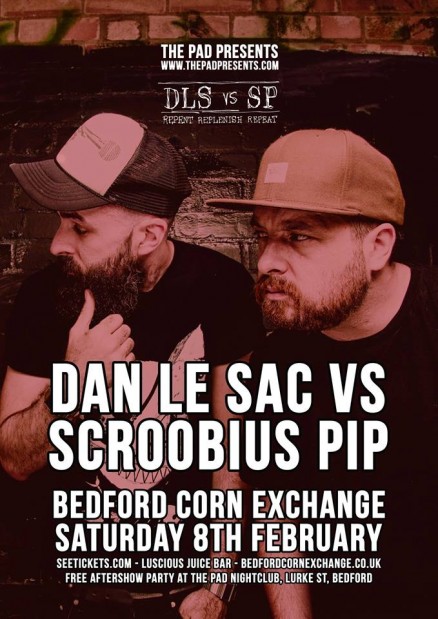 We are pleased to announce that we are bringing Dan Le Sac and Scroobius Pip back to Bedford for the first time since 2007, when we had them down at Esquires under our previous ‘Hungry Bears’ moniker.

The electronic Hip Hip duo are just about to release their 3rd album Repent Replenish Repeat in October 13 and their current winter tour tour is100% sold out. They come to us on the new album tour, showcasing tracks both new and old.

DLS VS SP burst into the mainstream back in 2007 with their incredible debut single ‘Thou Shalt Always Kill’, which to date has clocked up over 5 million plays on YouTube. Many other singles followed including Beat that My Heart Skipped, A Letter From God To Man and Get Better to name a few, and returned last month with a darker edge with recent single Stunner.

Main support comes from Itch, no stranger to Bedford he was last at the Corn Exchange with his ex band The King Blues and first on is Sarah Williams White.