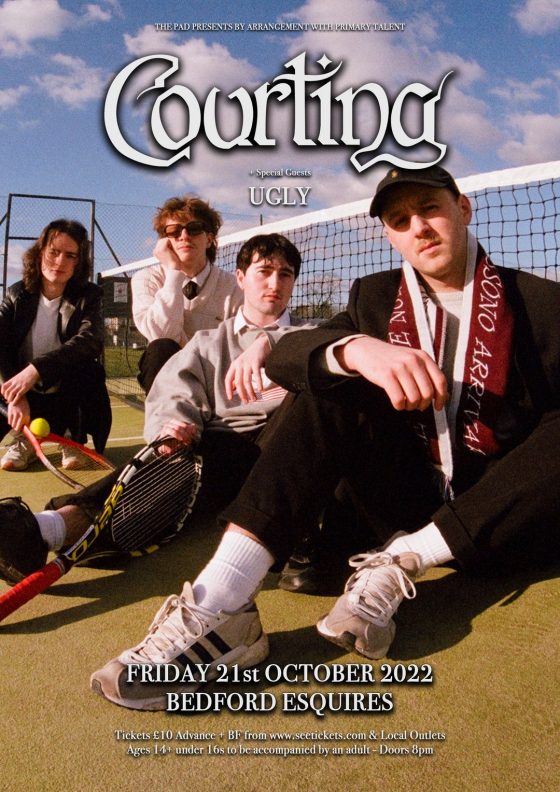 The track comes alongside the announcement that the band have signed to [PIAS], as well as details of a new run of UK tour dates which are set to take place in Sept / Oct 2022.

The new single comes on the heels of the band’s 2021 EP “Grand National”, which saw them earn plaudits across a wide array of media including landing two singles on the BBC Radio 6 Music Playlist (including an A list), as well as coverage in multiple end of year lists including NME 100, Dork Hype List 2022, Daily Star Ones To Watch 2021 & DIY Hello 2021, and further coverage across The Needle Drop, CRACK, Dork, DIY NME, CLASH, and London Evening Standard.

“Tennis” is a first-taste of Courting’s latest musical evolution. Produced by double GRAMMY nominated producer James Dring (Gorillaz, Jamie T, Sorry, Lana Del Rey, Blur, Loyle Carner), the new single still conveys that same sardonic and whip-smart commentary that has seen them earn swathes of fans and acclaim, but also finds them exploring a more dynamically expressive than ever before. Built around playful, angular guitars and driving basslines, “Tennis” is smattered with electronically manipulated idiosyncrasies, which occasionally erupt into moments of cacophony, before breaking through to the songs hook-driven chorus. The instrumentation accompanies frontman Sean Murphy-O’Neill’s incisive vocals which flit between considered and restrained monologuing, and explosive and acerbic singing, alongside uplifting, harmonised backing vocals. The new single is a marked step in a new direction for Courting, which only stands to accentuate their propensity for captivating and melodic songwriting.

Speaking about the single, the band says, “Tennis is a paypig’s personal redemption narrative, set in “the city”, and told in two parts. A twisted tale of two lovers’ back and forth, bound by cricket, bodybuilding, and money. A story as old as time. We named the song Tennis as a logical (but unrelated) sequel to our two previously released sports-related songs. To us, this felt like a natural ending to that idea. Dynamically, the second part of the song is supposed to represent a shift in tone for the character in which they realise their own worth and leave the situation that is set within the first part of the song.”

“Some of their most ambitious writing” – FLOOD

“witty writing that takes itself seriously without being pretentious” – London ES