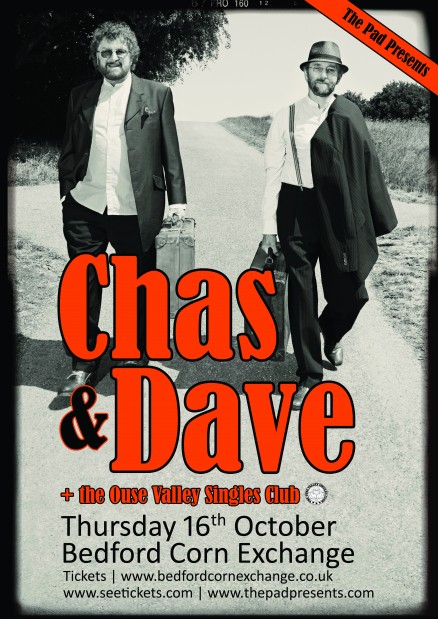 Following on from the release of their brand new album ‘That’s What happens’ on Warner Brothers Records which entered the top 20 first week at and saw the duo Headline The Royal Variety Show 2013 Chas & Dave head straight again for the ‘ON THE ROAD’ tour.

Chas & Dave began writing and performing songs together in 1972 having been friends since the early sixties. Now celebrating their 50th Anniversary the band recorded their first original album in 27 years which is a mixture of vintage rock & roll songs and new renditions of their own rockney classics. The album also features special guest stars sych as Jools Holland, Buddy Hollys drummer Jerry Allison & Hugh Laurie.

The band reached the top twenty in 1979 with “GERTCHA”, which became a nationwide catchphrase.    This was followed by “THE SIDEBOARD SONG” (GOT MY BEER IN THE SIDEBOARD HERE). In 1980 they hit the charts with “RABBIT”, which reached No. 8 in the charts and a No. 2 record in 1982 “AIN’T NO PLEASING YOU”.   This was followed by further hits “MARGATE”, &“LONDON GIRLS” In 1986 they had a top six record with “SNOOKER LOOPY”

Chas ‘n’ Dave are great musicians and know how to give an audience a good time. They have gained a cult audience of both young and old and due to public demand they are about to be seen together on stage once more. Generic Viagra offers on and Sildenafil prescribing information.

The auditorium will feature reserved seating on flat, tiered and balcony seating.  Tickets are on sale priced £25 in advance.

Guest support will come from The Ouse Valley Singles Club