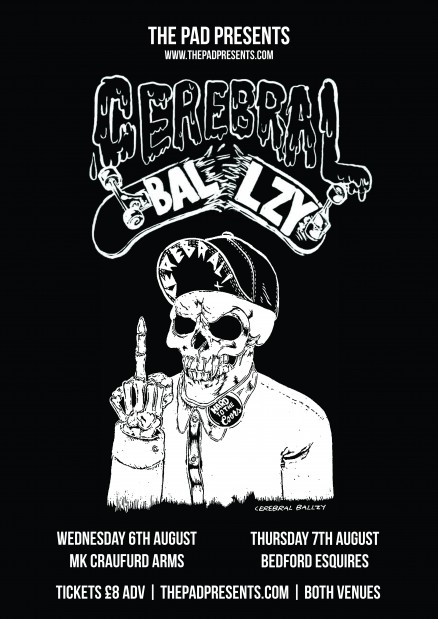 The Pad Presents are teaming up with the team at MK’s finest venue The Craufurd Arms to bring you one of the USA’s hottest punk bands.

CEREBRAL BALLZY are making a return to the venue, almost 2 years since they blew the roof off the place.

Many think former Mayor, Rudy Giuliani killed crime in New York City but he didn’t – he just moved it. If you read the fine print there’s still a murder a day in the Big Apple, but they’re in East New York where all the junkies and perverts from the old Times Square now reside.

In the centre of this rotten part of town, a gang of teenage punks calling themselves CEREBRAL BALLZY have emerged to start a band that sound exactly like their surroundings. Obsessed with skating, pizza, beer and Beavis & Butthead re-runs, these aren’t college kids who think “the slums got so much soul.” CEREBRAL BALLZY were born and raised in New York’s asshole and instead of crying about it, they scream their way through a sprawling mess of 80s-hardcore and punk rock, that sounds like the Beastie Boys doing drunk-covers of Bad Brains.

Led by frontman Honor Titus and bassist Melvin Honore, the band work to restore something golden to New York’s Punk Rock history – BALLS! – blasting through 12 tracks in under 20 minutes on their self-titled debut album.

Recorded in LA with producer Joby J. Ford (The Bronx, Trash Talk), the album tells the story of broken homes and broken bones with tracks like INSUFFICIANT FARE and DON’T TELL ME WHAT TO DO. Already dubbed “New York’s next great band” by UK music-bible NME, BALLZY have toured the UK and Europe twice, performing with Anthrax, Fucked Up and OFF! and continue their never-ending tour of America, jumping headfirst off every monitor and into every pit covered in puke.

Tickets are on sale right now from:
http://www.seetickets.com/event/cerebral-ballzy/the-craufurd-arms/794908