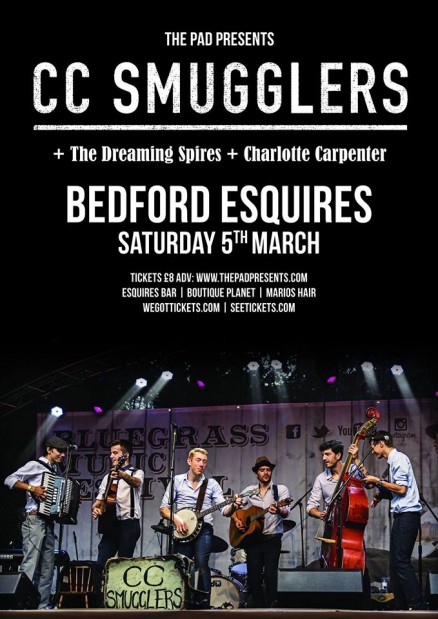 We are very pleased to be bringing our good friends CC SMUGGLERS back to Bedford Esquires on Saturday 5th March as part of their upcoming UK tour.

The last 18 months has been an incredible one for the ‘Mid Beds’ lads, seeing them play nearly every major UK festival, from Glastonbury in June, to Bestival in September then back recording new material, and countless sell out tours of the UK and Europe.

The CC Smugglers sold out in advance at Esquires last May, with it being a Saturday, it’s sure to be another busy one, and another great night, early purchase of tickets is advised!

Very special guests are The Dreaming Spires. No strangers to this is the second visit to Esquires. The oxford based band was formed …out of the ashes of the much loved band GOLDRUSH.

The band is led by singing brothers Robin and Joe Bennett, who also handle most instrumental duties. Known to some as “the Notorious Bennett Brothers”, Robin and Joe have carved out some renown as accomplished musicians as well as being co-founders of acclaimed festivals – Wood & Truck, a label and even a record store.

The Dreaming Spires have been lucky enough to have 3 great drummers: Jamie Dawson plays drums and percussion on the new album, and Mike Monaghan and Loz Colbert played on Brothers in Brooklyn. Nick “Growler” Fowler (also of Gaz Coombes’ band) contributes guitar to many tracks and occasionally plays live with the band.

The brothers’ musical pedigree includes stints in Goldrush and Danny & the Champs, touring and recording with Mark Gardener of Ride, and collaborations with everyone from Gary Louris to Garth Hudson of The Band, Mercury Rev to Saint Etienne (the brothers are members of the present live incarnation of Saint Etienne). Joe also plays with fellow travellers Co_Pilgrim and Robin co-writes with several other acts and has his own side-project Dusty Sound System.

From their earliest guise (a band called Whispering Bob who released a mini-album in the late 90s and received airplay from radio legends John Peel and, naturally, Bob Harris) the Bennett brothers have long straddled a line between the influence of roots music, classic 60s pop and their youthful love of indie rock from both sides of the Atlantic, always anchored by their distinctive harmonies in the tradition of The Everly Brothers, The Beatles and The Byrds.
Opening the evening is Charlotte Carpenter.  Charlotte has previously self-released four EPs and toured the country as much as she possibly can. She recently came off a tour with Marika Hackman and has also played alongside George Ezra and Ethan Johns. Charlotte has also seen early support from Lauren Laverne on BBC Radio 6Music and Huw Stephens on BBC Radio 1, one to look out for in 2016.

Tickets on sale priced £8 through We Got Tickets and Seetickets.com and are available in person in Bedford from Planet Boutique in The Arcade and Danny’s bar at Esquires and in Kempston from Mario’s Hair Design