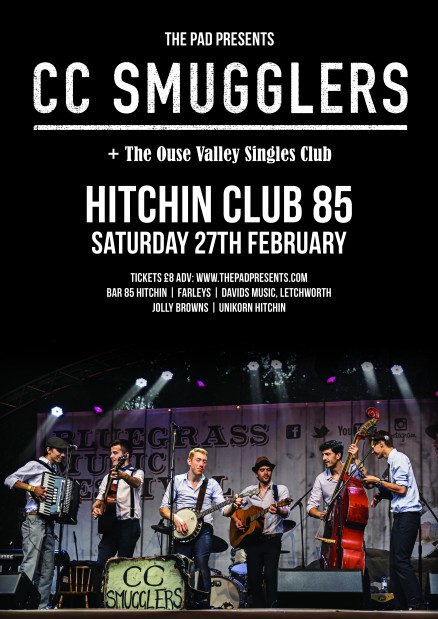 We are very pleased to be bringing our good friends CC SMUGGLERS to Hitchin Club 85 on Saturday 27th February!

One of the finest live bands in the UK, CC Smugglers have played nearly every major festival in the last 18 months, including Glastonbury and Bestival, and are firm favourites of BBC 2 legend Bob Harris.  The band won over the huge crowd at 2015 Rhythms of The World Festival and we expect a busy night at Club 85.

Described as ‘Genuinely innovative, creative and contemporary’ CC Smugglers have developed a reputation for unique original compositions and red hot live shows. Miss them at your peril!

Drawing on varied elements of musical genres they don’t really understand, the band have recently completed their debut album, an infectious stew of gypsy jazz, blues, folk, country and roots. They have built a reputation for great live shows both locally and further from home and have returned from a successful summer on the festival circuit to perform a few select shows in the run up to the album release.

Special guests for the evening are The Ouse Valley Singles Club fresh from dates at Club 85 and rawkus show at Balstock at the end of the summer the OVSC bring their brand of comedy skiffle over from Bedford. Think… George Formby meets The Clash.

Opening the evening is Charlotte Carpenter. Charlotte has previously self-released four EPs and toured the country as much as she possibly can. She recently came off a tour with Marika Hackman and has also played alongside George Ezra and Ethan Johns. Charlotte has also seen early support from Lauren Laverne on BBC Radio 6Music and Huw Stephens on BBC Radio 1, one to look out for in 2016.