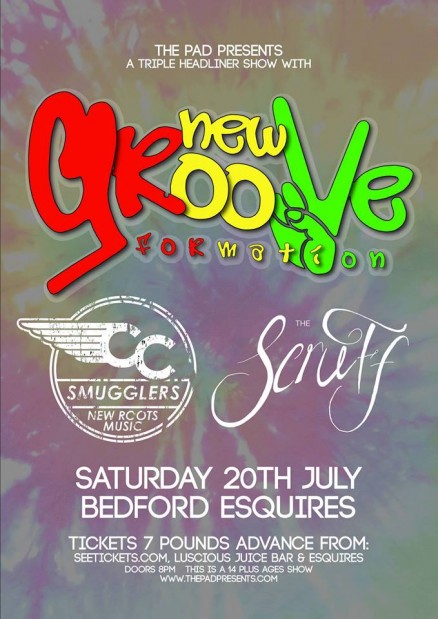 With the festival season in full swing things tend to go a little quiet indoors on the gig front so we have decided to turn that theory on its head and bring two of the regions best live bands back inside together for one huge night at Esquires on Sat 20th July featuring a co-headline with New Groove Formation / CC Smugglers.  Between the 2 bands this year they have played or are booked to play almost every UK festival this year including Glastonbury, Secret Garden Party, Sunrise Celebration, Beautiful Days, Boom Town, Bestival, Festival Number 6, Silverstone, Cambridge Folk Festival, Strawberry Fair,  Fordham Festival, Wave Form, Rhythms Of The World, Endorse It In Dorset to name but a few!  On rare free weekends for both bands somehow we have managed to snare them both and pair them up for the co-headline show of the year.

After 6 years of relentless gigging, New Groove Formation have qualified as one of the UK’s most entertaining and energetic live acts on the underground festival and club circuit. The band fuse Funk, Ska and Reggae, mix in some horns, didge and percussion, then add energetic tones and electrifying rap. Their power is projected with great force and lifts all unsuspecting audiences in front of any stage.

New Groove Formation is not a band it’s a way of life a dream of many people not just players but fans as well. It is their duty to the planet to carry the inferno across the land and around the world.

Co-headline for the evening are no strangers to the Bedford Gig going public as the lovable CC Smugglers are back in town to claim their stake as one of the best live bands in the area., Described as ‘Genuinely innovative, original and contemporary’ CC Smugglers have developed a reputation for some interesting and creative mixes of roots music in original tunes and great live shows. CC Smugglers are a rag tag 6 piece from the wilds of mid Beds who formed in 2009, consisting of Richie (vocals and harmonica), Dan (double bass), Ryan (lead guitar, dobro and banjo), Sam (guitar), and Dave (keys and trombone) and this time introduce Bedford percussion legend new boy Flow Toulman into the fold.

Drawing on varied elements of musical genres they don’t really understand, the band deliver an infectious stew of gypsy jazz, blues, folk, country and roots that really gets your feet tappin’. They have built a reputation for great live shows both locally and further from home and recently stormed the Bedford Corn Exchange variety night back in March winning over a new legion of fans.

Tickets for the big gig are priced £7 advance and £8 on the door, a further band will be added to the proceedings in the coming days.  Tickets on sale via Seetickets and in person from the bands themselves, Luscious Juice Bar and Danny’ Bar at Esquires