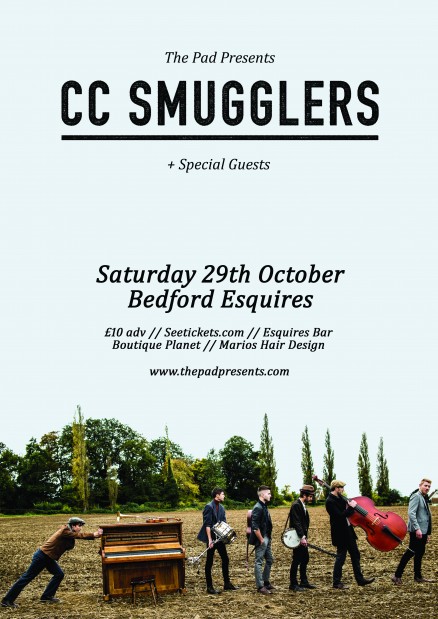 Bedford super group CC Smugglers will embark on a 16 date UK tour following a summer packed with appearances at some of Europe’s top music festivals – including a performance alongside Lana Del Ray, Lionel Richie and Simply Red opening for Bruce Springsteen at the prestigious Werchter Festival in Belgium on 9th July before releasing heir irresistibly exuberant new single ‘Rhythm’ is out 15h July

The band started out as “guerrilla buskers”, hijacking queues waiting to see other artists, or commandeering underground trains and escalators. They got their big break by playing outside every UK tour date of the two-time Grammy Award-winning Old Crow Medicine Show. Not even a severed artery on his finger could stop frontman Richie Prynne – he delayed surgery to lead the six piece on the audacious escapade. So impressed were the Old Crow Medicine Show they invited them to share their platform on the remaining dates.

It was Richie who formed the band after busking alone for some years as a teenager. He enlisted the help of Dan Edwards (double bass) Ryan Thomas (lead guitar) and Sam Barrett (rhythm guitar and fiddle) who formed the Bedfordshire contingent of the band for several years. They were joined 18 months ago by Joplin Parnell (keys) and Joel Barford (drums) both accomplished young jazz players “their influences have really allowed us to explore more contemporary challenging arrangements” said Richie.

Listen to CC Smugglers and you’ll hear the ghosts of American folk music, swing, jazz, country, ragtime and bluegrass. Listen more closely and you’ll hear contemporary touchstones such as hip hop, metal, dubstep, house and dancehall. Nothing is off limits for this outfit.

Tickets go on sale on Friday 17th June on Seetickets and will be available in person from the regular ticket outlets of Planet Boutique, Esquires Bar and Marios Hair Design from Monday 20th June.

The last 4 visits of CC Smugglers to Bedford Esquires have sold out well in advance and this date will be no exception as the bands profile continues to soar upwards, don’t email us when it’ sold out, there will be nothing we can do!

“The best live band on the scene at the moment.” Cerys Matthews // BBC6 Music

“Besides the infectious joy they exude while playing, their understanding of the music is so deep as to make it sound effortless.” Alex Petropoulos // Song lines Magazine