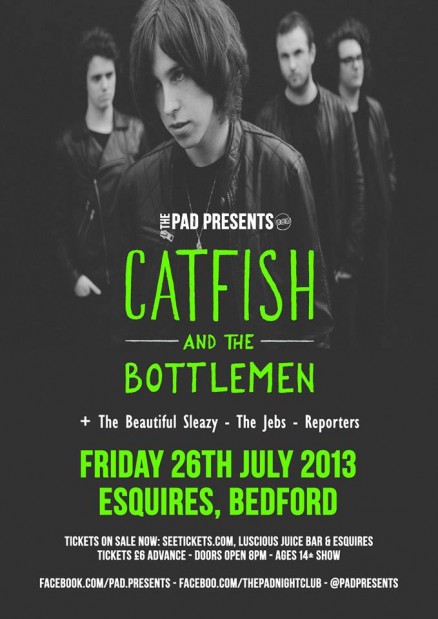 Catfish & The Bottlemen + The Beautiful Sleazy + The Jebs + Reporters

CATFISH & THE BOTTLEMEN +  The Beautiful Sleazy + The Jebs + Reporters – Friday 26th July at Bedford Esquires.
We are pleased to announce that we’re bringing another one of those bright young bands to town for a show on Friday 26th July.

Catfish and The Bottlemen play loud, explosive, sexy rock and roll songs – full of guitars and energy. The 4 piece from Llandudno, who met at school, have honed their amazing live show over the last 18 months, which sees vocalist and guitarist Van McCann climbing the walls and playing as though his life depends on it, whilst Billy Bibby (lead guitar), Benji Blakeway (bass) and Bob Hall (drums) keep up the action their end with powerful, thrilling tunes.  With a brand new single, tour and appearances at The Great Escape, Dot to Dot and Tramlines Festival the summer is looking decidedly busy for these four young men.

The band signed to Communion Records (Ben Howard, Michael Kiwanuka, DeapVally, Half Moon Run, Gotye)this spring, and release their debut single for the label on 17th June 2013.  ‘Homesick’ starts off gently before bursting into a full-on rock/pop classic with thrashing guitars – infectious and exciting and all under three minutes.Working with producer and Communion co-founder Ian Grimble(Manic Street Preachers/Daughter/British Sea Power/ Red Hot Chili Peppers) at the legendary Rockfield Studios in Wales, ‘Homesick’ is the band’s first offering from what was a hugely productive session.   The track has already been played by Steve Lamacq on 6 Music (who also tipped them in the Independent on Sunday) and Zane Lowe on Radio 1, who made them his ‘Next Hype’

THE JEBS – 5 hardworking lads playing extremely good music and have sold out Esquires in their own right. If you’ve not seen them yet then make the effort!

REPORTERS – Reporters combine the fizz and exuberance of youthful energy with impressive song writing to create a fantastic, honest, and vibrant sound. This 2 piece have been compared to early Black Keys and come to us off the back of another impressive release.

Tickets for this show are £6 adv in person from: