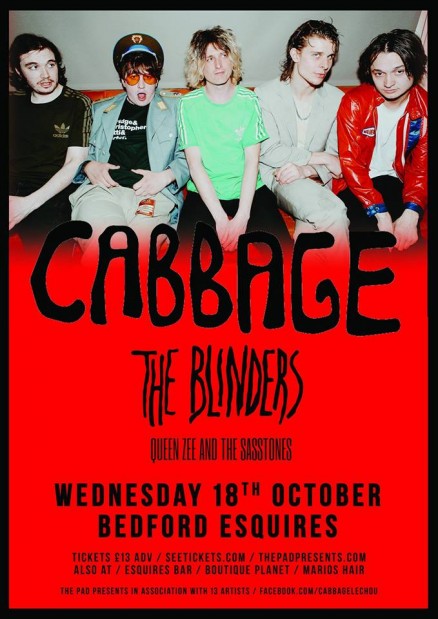 + The Blinders + Queen Zee & the Sasstomes

We’re very pleased to announce that we have (finally!) secured a date with Cabbage on their October UK tour, with ridiculously strong support from The Blinders and Queen Zee & The Sasstones!

Cabbage headlined our stage at Levels Festival in Luton last year and have since become the hottest band in the UK, selling out every single date on their tour earlier this year. This one will sell out, so make sure you pick up tickets in advance.

Manchester based five piece Politburo, serving up an idiosyncratic, satirical attack in the form of discordant neo post-punk.

With a collective desire to express themselves creatively, artistically, and in a semi rebellious – but ultimately meaningful nature – Cabbage are here to fight for all that’s good. Oliver Rodrigues in 1825 said: “The power of the arts is indeed the most immediate and fastest way to social, political and economic reform,” and Cabbage join and submerge in that struggle and inevitable victory.

On Friday 30th September Cabbage released their new four-track EP ‘Uber Capitalist Death Trade’ on James Skelly’s Skeleton Key Records, the original home of Blossoms and home of She Drew the Gun. The EP is the first of three upcoming EP releases by the hotly-tipped Manchester five-piece, with the second EP due next month. ‘Uber Capitalist Death Trade EP’ follows the recent single ‘Dinner Lady’, released as a 7 inch on Tim Burgess’s Ogenesis Recordings.

Tickets are £13 advance, on sale Friday 9th June at 10am from seetickets (link above) and also available in the local ticket outlets of Esquires Bar, Boutique Planet & Mario’s Hair Design in Kempston