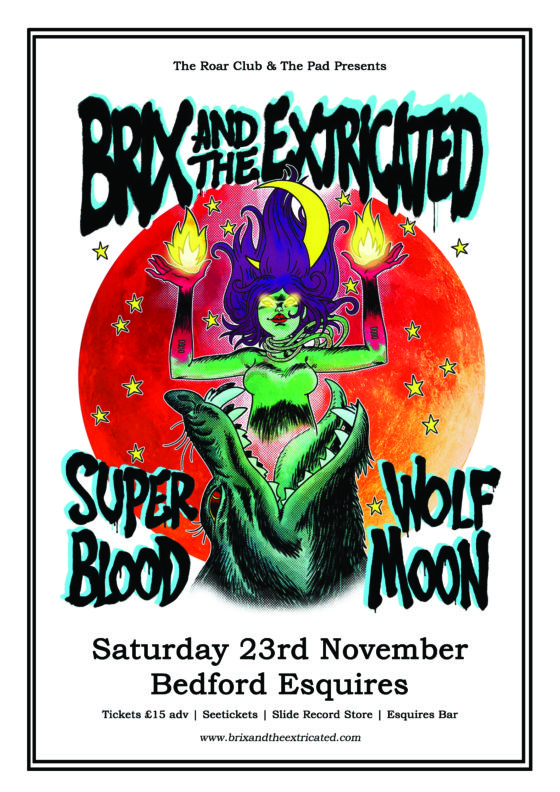 Calling all fans of THE FALL & POST-PUNK – The Roar Club & Pad Presents join forces again to bring Brix to Esquires. Brix E. Smith surely needs no introduction and those lucky enough to have seen her support the Jesus & Mary Chain in September last year know this is not to be missed.

Brix & The Extricated were formed in 2014 by vocalist/guitarist Brix Smith-Start and the legendary bass player Stephen Hanley. Stephen’s brother Paul joined on drums reigniting the Hanley Brother powerhouse rhythm section. The addition of Steve Trafford on guitar brought together these influential, former members of The Fall. The line up was completed with the addition of Irish guitarist Jason Brown.

The starting point was reclaiming classic songs from the Fall back catalogue, written by members of the Extricated, which had not been played for 30 years. These key songwriters quickly moved on to writing new material, which forms the basis of their debut album (produced by John Reynolds) due for release in September 2017 on Blang Records.

Brix & The Extricated are a sonic juggernaut, with a woman at the helm, infusing the hypnotic brutality with sunlight, harmony, hooks and riffs.

Upcoming shows include The Ritz in Manchester alongside The Membranes, Dub Sex and Evil Blizzard on April 29th. On June 10th they will be at London’s iconic Roundhouse as special guests of the Wedding Present. Further dates to be announced.

Stephen Hanley (The Big Midweek – Route Pubs) and Brix Smith-Start (The Rise, The Fall, And The Rise – Faber & Faber) have both written critically acclaimed, best selling memoirs, about their lives as musicians and their years in The Fall, which are widely available.

What are people saying about the Brix & The Extricated?

“The key is the new songs and there are many of them in the wings. The new song in the encore is, perhaps, the high point of the set and a real inkling that the best is yet to come – a grinding bass and great vocal this is a great moment that proves that the back catalogue is just the door of perception and the new stuff will be the proof and making of the band.”
John Robb – Louder Than War

“Ex-The Fall’s Brix Smith and co., battle-scarred, front-line veterans of rock’s toughest tour-of-duty, proved themselves the real deal, storming in with US 80s/90s. Brix vocalised with unfettered verve and authority, while the buzzing guitars of Steve Trafford and Jason Brown whipped up a storm. They were more than ably backed by powerhouse rhythm men, Steve and Paul Hanley, who created a savage, almost motorik assault.
New song “Something To Lose” was an exercise in anti-nostalgia. They closed with an unstoppably brilliant New Big Prinz, arguing that this should be their year.
Record Collector Magazine