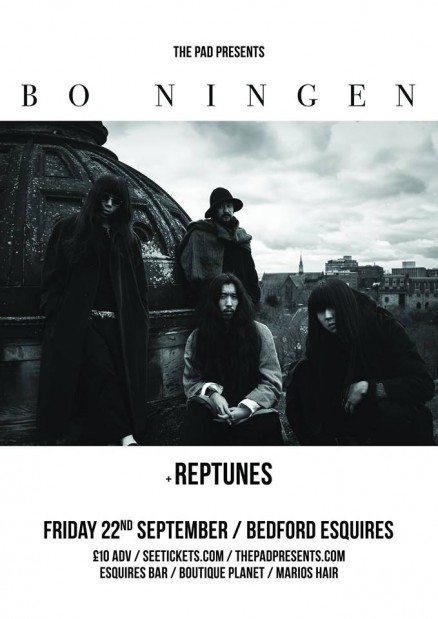 Friday 22nd September will see a truly amazing band who played one of the greatest shows here in recent memory, Bo Ningen are return to Bedford Esquires for a special festival warm up show!

From the heart of Tokyo to a village in the mountains, Bo Ningen are four skinny Japanese guys based in London calling themselves ‘enlightenment activists from far east psychedelic underground’. Their first gig was in 2008.

Since then they have played the UK, France, Germany, Spain, Portugal, Romania, Italy, Austria, Finland and Japan. Their shows have also been part of art and fashion events including the Frieze Art Fair, Venice Biennale, The Dazed TV special filmed by Rankin and the V&A. They were also specially commissioned by The Brancharge Festival to perform with the animation Cat Soup in London and Jersey and the band have recently collaborated with the band of the moment, Savages. As if beamed down from 1970, Bo Ningen’s free spirit and incendiary live psych-outs remind you what watching a rock’n’roll band should be about.

‘Bo Ningen sound like their absolute lives depend on their crowd having the best possible time – and having seen them in the flesh (and hair, all over the place), it’s an emphatic yes from the other side of the barrier’ – BBC

Bo Ningen say ‘Being psychedelic means to stand quietly / loudly in the middle of interzone and stare at both sides at once’. Witness the spectacular.

Support comes from REPTUNES, formerly our most favourite of favourite ‘local’ bands LUPO, so it’s going to be more than good, make sure you don’t miss them – www.reptunesband.com Tickets are £10 advance from Seetickets and the local outlets of Esquires Bar, Marios Hair Design and Planet Boutique.