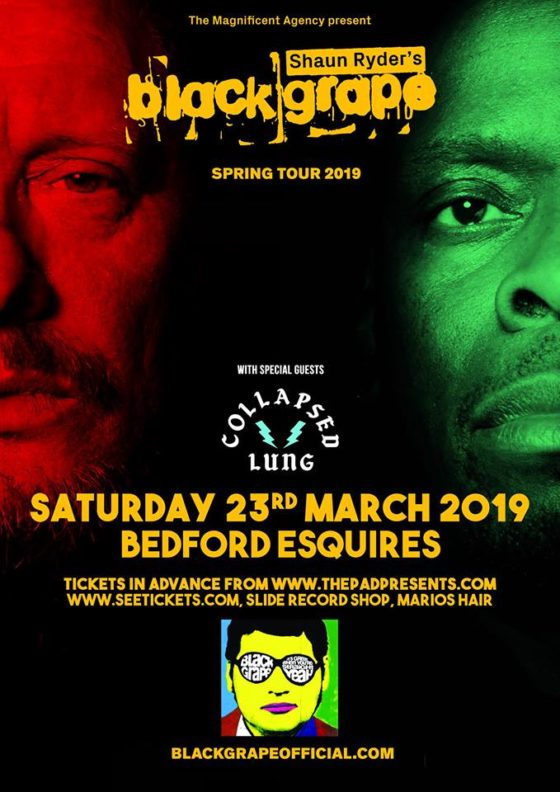 Black grape could only have been made in Manchester. The swagger, fun and cryptic humour seem hewn from a city historian AJP Taylor once described as offering an archetypally different way of English urban life to London.

Both Shaun Ryder and Paul Leveridge, known as Kermit, came from edgy-but-cool parts of the city. In Shaun’s case Salford, with Kermit originating Moss Side.

So we have two restlessly creative men, both from the wrong side of the tracks, neither inclined to go to art school or enrol on an MFA programme, yet loaded with street smarts and musical talent, and wanting the world. Good old punk had told every scally they could have it, and a generation of us went for it in our own ways, with varying degrees of success. Shaun’s astonishing rise and fall with the Happy Mondays is the stuff of legend.

As the friendship developed, so too did a stunning collaboration. It’s Great When You’re Straight…Yeah, the ironically entitled album, which gave a nod to their hook up as drugs buddies around the grizzled fag end of Happy Mondays and Kermit’s band The Ruthless Rap Assassins. It was a storming phoenix rising from the ashes of the other projects that seemed to have run their course.

It’s Great When Your Straight…Yeah was one of my favourite albums of, well I’m calling Shaun from the airport in Milan, and he’s assuring me it was over twenty years ago. Black Grape followed this up with Stupid, Stupid, Stupid, which, while not hitting the giddy heights of its predecessor, had enough moments to cement the band as a fixture. Then…nothing. Till now.

Shaun’s triumphs, struggles and diversions have been well documented. The usual contract and money hassles, a best-selling account of life in the Mondays, a stunning electropunk album from nowhere in Amateur Night in the Big Top, a serious and informative investigation of UFO’s as an author and broadcaster, a reality TV bon vivant and finally, a life as a clean-living family man, which has supplanted his old ways. And of course, there was the reformation of the Happy Mondays.

Years of hard living, however, had taken their toll on Kermit. He would develop health issues making a remarkable recovery from his life-threatening condition and operation, and this would be the catalyst for another Black Grape collaboration.

Black Grape are back on the road, and with new album Pop Voodoo that really does rock the f**k out of the discotheque. It’s a rewind to over twenty years ago and the glory days. Shaun’s word play has never been deployed to such devastating effect, and he scores a bullseye whether he hits the obvious targets (Trump), and the more obscure ones…well, find out for yourself. The world is in a bit of a state right now, and bull reigns more than ever, and perversely disguised as candour. We need Manc street sass, intelligence and wit more than ever right now. This album has that in spades.

Also available from the central box office: 01234718044 and www.bedfordcornexchange.co.uk