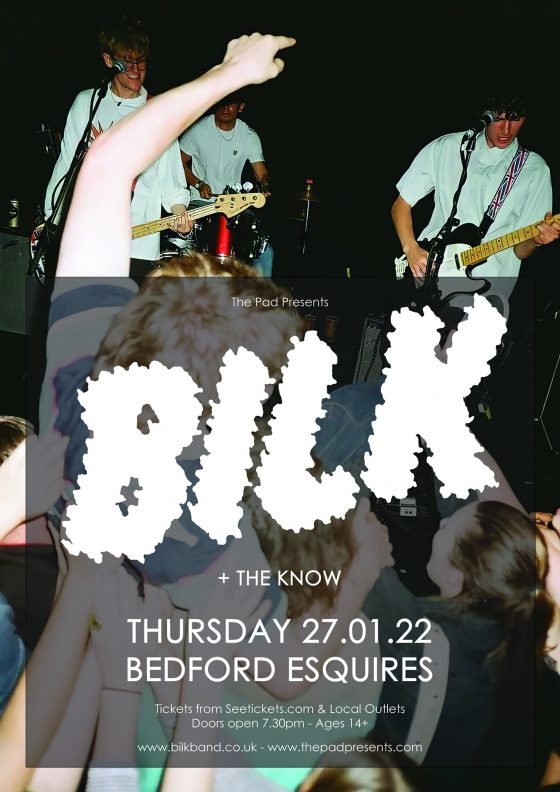 BILK + The Know
Thursday 27th January
Bedford Esquires
We are very pleased to be bringing the brilliant BILK back to Esquires as part of their 2022 tour!
“Bilk are turning heads with their riotous bangers” – The Daily Star
“Bilk seem to tap into something primal, something universal” – Clash
“Bilk are bringing the bangers” – Dork
“Chaotic and full of youthful exuberance” – The Line of Best Fit
“Bilk are redefining UK Punk one step at a time” – DSCVRD
Reflecting on the highs and lows of British youth culture today, Bilk are three musicians creating a unique angsty blend of indie, rap and punk from the suburbs of Essex, UK. The brainchild of frontman Sol Abrahams (21), completed by bassist Luke Hare and drummer Harry Gray, their honest social commentary is as real as it gets, and found them a new fan in One Direction’s Louis Tomlinson – who invited the band to open up for him at Crystal Palace Bowl. Their raucous live shows are becoming a thing of cult legend amongst a new generation of music fans, resulting in chaos at venues across the UK and now overseas
This is a 14+ ages show, under 16s to be accompanied by an adult
Support from one of Bedford’s fastest rising bands, The Know.