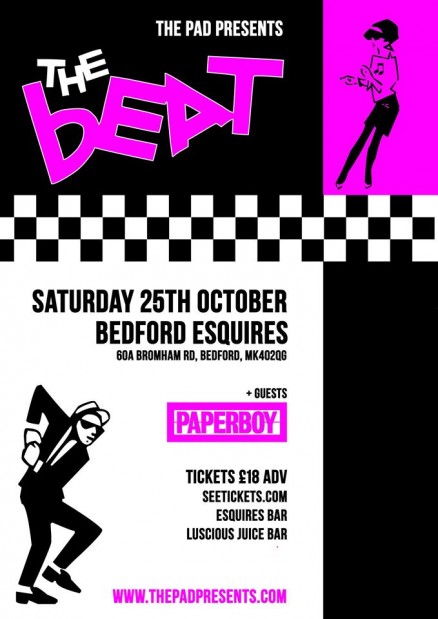 3 years have now passed since we put The Beat on with Neville Staple in front of 800 people at Bedford Corn Exchange, so we thought we’d bring them back for an intimate show at our good friends gaff, Esquires.

One of the biggest bands of the 2-Tone movement, The Beat present a wall of sound that transcends time and ska fusion rhythms to ignite a crowd. They play with the sole aim of connecting with and entertaining their appreciative audience with their relentless energy and world class musicianship.

The Beat are known the world over for a string of hit singles, including “Mirror in the Bathroom”, “Too Nice To Talk To”, “Can’t Get Used To Losing You”, “Hands off She’s Mine” and “All Out To Get You”. Their songs of peace, love and unity fuse ska, pop, reggae and punk rock and their dynamic live show has garnered them a loyal following at home and abroad.

The Beat formed in Birmingham in 1978, part of the West Midlands ska revival scene that also produced The Specials and The Selecter, whilst London saw the formation of Madness and The Bodysnatchers.

Their first single was an arresting version of Smokey Robinson’s “Tears Of A Clown”, given a completely new feel, and was backed with their own composition “Ranking Full Stop”. Released in a one-off deal on Jerry Dammers’ Chrysalis-backed 2-Tone label, the single stormed into the Top 10 in December 1979, and saw the band appear twice on Top Of The Pops. Backed by Arista, the band formed their own label Go-Feet Records.. The first release in February 1980 was another Top 10 hit, “Hands Off… She’s Mine”, and was the first of twelve chart singles for the band on Go-Feet.

The band released three albums “I Just Can’t Stop It” (1980), “Wha’ppen” (1981) and “Special Beat Service” (1982), which contained many tracks that demonstrated their more politicised and socially-conscious leanings. All three albums were reissued in the Summer of 2012 by Edsel Records with bonus additions.

The 2014 line-up features Ranking Roger and Ranking Junior on vocals, Fuzz Townshend on drums plus Andy Pearson, Matt Godwin and Steve Harper and Bobby Bird on bass, sax and guitars.

“The Beat. Who needs the brave new world when the old school is still this good?” Sunday Mirror

“Mirror in the bathroom, please talk free.
The door is locked just you and me.”

Ticket will be on sale from the venue and Luscious Juice Bar from Monday 28th April.

Full support line up to be added soon.