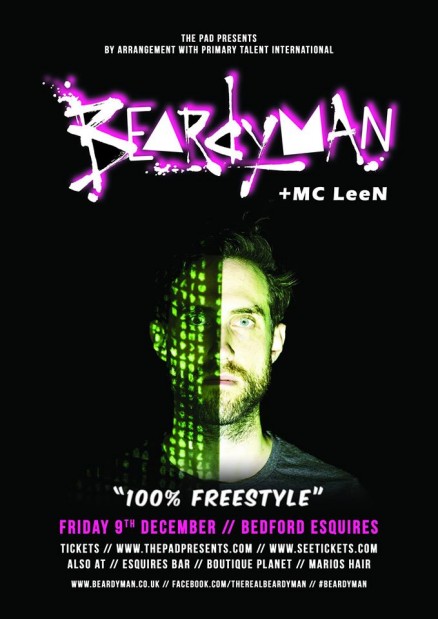 Yeeessssss…. It’s about 5 years in the making this show, but finally we’ve been able to secure a date with the genius that is Beardyman at Bedford Esquires, with MC LeeN in tow on Friday 9th December.

Imagine a machine that can let you record and mix music in real time – one that will enable musicians to get down the ideas in their head instantly, with no filter between the germs of a song and hearing it come alive straight away. Imagine the fevered genius capable of building such a perfect musical aid. Meet the BEARDYTRON_5000mkIV (Beardytron). And meet its creator…Beardyman, whose performances h…ave been viewed over 60 million times on YouTube alone with improvisation being at the heart of the creative process.

As for the Beardytron that Distractions was made on? It requires four iPads and two laptops “running at just below the speed of light” to enable Beardyman to instantly process any song ideas he has, straight away being able to access his hundreds of presets made on myriad instruments and manipulating them in infinite combinations to record and mix live. Frankly, we should be grateful that Beardyman has used the Beardytron to make a great album, rather than create the black hole it’s probably capable of.

This show is going to be something just a bit special, Beardy sells out everywhere and we highly recommend picking up tickets in advance!