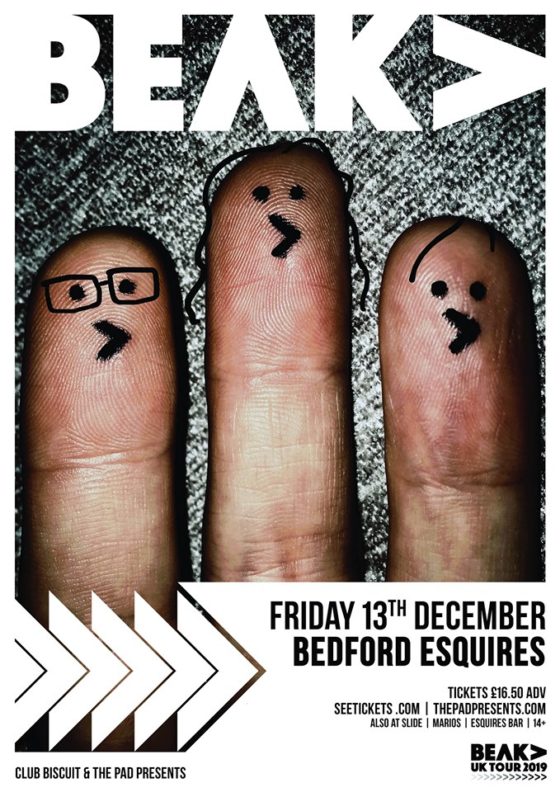 The Pad Presents and Club Biscuit have joined forces to somehow bring BEAK> to Bedford for the very first time.

Formed in Bristol by Geoff Barrow (PORTISHEAD), Billy Fury (Robert Plant) and Will Young (no, not that one – Moon Gangs), BEAK> are a highly acclaimed electronic outfit influenced by psychedelia, krautrock and seventies movie soundtracks.

Initially considered a side project of Geoff’s other, hugely influential band, over the past ten years BEAK> have evolved into one the UK’s most original and highly regarded acts in their own right and their 2018 album ‘>>>’ was released to universal praise.

“I love their slightly sinister krautrock leanings and sense of mischief. A brilliant band and a brilliant album.” – Marc Riley (6Music albums of the year 2018)

‘…the sort of brilliantly executed subverted pop music that Radiohead only flirt with these days, simultaneously tuneful and deeply weird, as inviting as it is discombobulating.’ Loud and Quiet (10/10)

‘…>>> is yet another excellent record from Barrow and co, one which will surely delight for quite some time post-release.’ The Skinny (5/5)

One for fans of Boards of Canada, Broadcast, Stereolab, Neu!, Silver Apples, LCD Soundsystem and the aforementioned Radiohead / Portishead, BEAK> have headlined stages at festivals like Primavera Sound, All Tomorrow’s Parties and End of the Road. Their last UK tour saw them sell out dates across London / Brighton / Manchester etc. We are absolutely delighted to be bringing them to Esquires on a Friday night for an intimate club date.

Tickets go on sale from 9am, Friday the 12th of July 2019 from Seetickets and shortly afterwards from Slide Records / Esquires Bar (with no booking fees). Act fast!

Support to be announced.