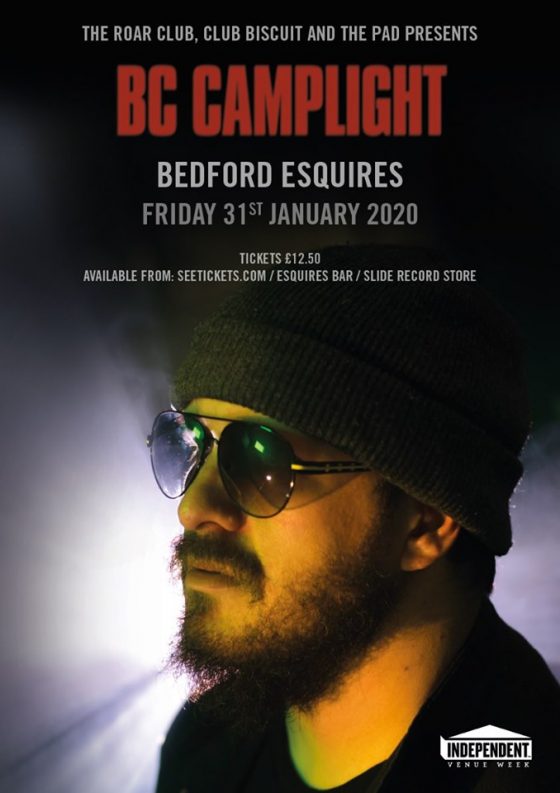 The Roar Club, Club Biscuit & The Pad Presents are delighted to confirm that BC Camplight will be playing a very special intimate full band performance at Esquires for Independent Venue Week.

BC Camplight is the moniker of maverick songsmith Brian Christinzio. The Philadelphian turned Mancunian is one of indie music’s most forward-thinking artists with a discography which acts as a soundtrack to a life rife with bad fortune, mental illness, running foul of the law, and ultimately absolute fucking redemption.

After a series of brilliant but largely overlooked albums and stints playing with The War on Drugs and Sharon Van Etten, 2018 saw release the release of ‘Deportation Blues’. An amazing piece of work (featuring the breakout hit ‘I’m Desperate’), it was voted best LP the year by BBC 6Music, and finally brought BC Camplight the success he deserved.

‘I think he’s the best live act in the world to be honest, and Deportation Blues is just a classic, classic album from start to finish. I urge everybody to go out and buy it.’ (Marc Riley)

‘…even though this is an album that has its moments of darkness, there’s an irrepressible spirit and joy contained in almost every single song here…’ (MusicOHM)

A brilliantly compelling performer who has been compared to acts as diverse as Arcade Fire, John Grant, Prince, Elton John, Suicide and Brian Wilson, a BC Camplight show will often culminate in Brian playing piano one handed whilst liberally slugging from a bottle of wine.

“It’s no fun giving an audience a standard show that they can get elsewhere” explains Christinzio. “Sometimes it’s intense, sometimes it’s emotional, sometimes it’s basically a fucking stand-up routine. I always like to involve the audience and make it memorable for everyone involved. I think we are one of the best live bands in the world and it’s an odd feeling finally getting an opportunity to get in front of loads of ears and eyes”.

With his many dates of his current UK tour having sold out in advance and a new album due in the Spring of 2020 on Bella Union records, we are extremely privileged and excited that BC has agreed to play Bedford as part of Independent Venue Week. Booking early is advisable.

Tickets are just £12.50 in advance, available from 9am Friday 25th October from www.seetickets.com and shortly afterwards from Esquires Bar / Slide Record Store.