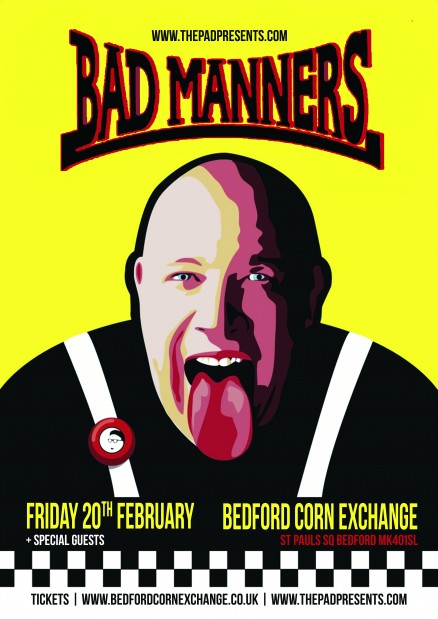 www.thepadpresents.com
Bad Manners
+The Bighead
Friday 20th February, The Corn Exchange, Bedford
Bad Manners are returning to Bedford Corn Exchange for a night of full on Ska antics! The band quickly became the novelty favourites of the Ska movement through their bald, enormous-bodied frontman’s on-stage antics, earning early exposure through their Top of The …Pops TV exploits and an appearance in the live film documentary, Dance Craze.Bad Manners were at their peak most popular during the late 1970s and early 1980s, during a period when other ska revival bands, such as Madness and The Specials, The Beat and The Selecter, filled the charts. Bad Manners spent 111 weeks in the UK Singles Chart between 1980 and 1983 and have continued as a worldwide popular touring live act to this day.Some of Bad Manners’ more notable hits include “My Girl Lollipop”, “Lip Up Fatty”, “Ne Ne Na Na Na Na Nu Nu”, “Lorraine”, “Just A Feeling”, “Walking In The Sunshine”, “Can Can” and “Special Brew”. One of the main reasons for their notoriety was their outlandish huge-tongued and shaven-headed frontman, Buster Bloodvessel. His manic exploits got them banned from the British BBC TV chart show Top of the Pops and they were also banned from Italian TV after Bloodvessel mooned a concert audience, after being told that the Pope was watching on TV!
Support comes from The BigheadTickets £20 advance