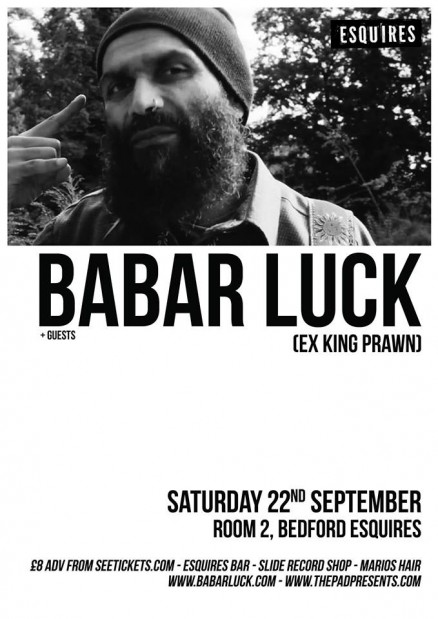 Babar Luck is an enigma.

He is something that is a multicultural mix he calls himself a Britishtaanee a Jamaicanstaanee a Englishtaanee and naturally a worldcitizen.

Babar was born in Pakistan (Quetta)and came to uk when he was 8 years of age raised by a single mother of devout Muslim faith and educated principles.

He fell in love with all forms of music from his teenage years. Growing up in a poor working class area Canning Town, East London, he chose to mix with and was taken under the wing of Africans Jamaicans and white working class communities and traveler communities.

Babar was the bassist songwriter/shouter in alternative/punk legends King Prawn for ten years 1992-2002 they were/are a very political and underground phenomenon.

After the King Prawn years Babar has established himself as solo artist having released 16 albums in a variety of guises.

His last 3 releases are on Bandcamp.com. He has several albums on iTunes.

He has the DIY ethic BUT he would admit he has been blessed to be looked after by many peoples. He has toured all over the UK, Europe, Australia and Japan.

He has a wonderful folk band called The Babar Luck world citizen folk band, they have recorded 2 albums…about to record their 3rd.

He also has a punk/rock band called Eastendtrinity

The common theme throughout his music is compassion forgiveness and love for all humanity.

This is common thread in many genres but Babar Luck does it with bite, due to he feels a love of all humanity and having to mix with the diversity that is the London metropolis.

His live shows are a truly amazing experience as you are experiencing ….

Babar can go from a eight minute kawaalee to a two minute punk song then to a Country tinged ballad.

Come hear and see this unique man as Babar has said himself “my live shows are a acid trip without the acid and the aim is to aim for the heart and to edutain inspire & invigorate”.

Full support to be announced

Tickets are on sale now, £8 adv from Seetickets and in person from Bedford Esquires, Slide Record Store & Mario’s Hair Design.