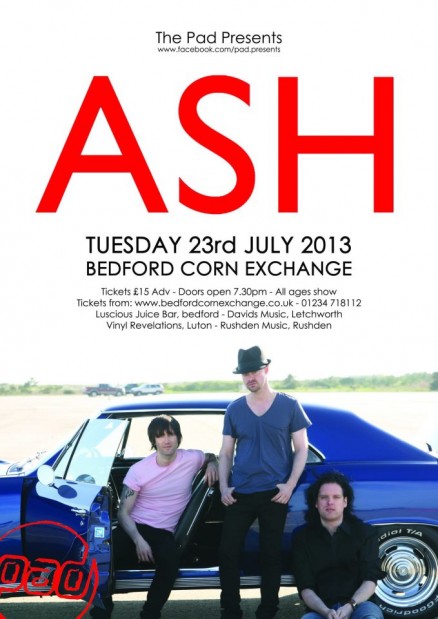 Indie royalty ASH come to Bedford Corn Exchange for The Pad Presents as part of their UK summer tour.

Well, what can we say about this one?! We are massively delighted to be able to confirm that we have booked Ash in for a Pad Presents show on their summer tour. For this gig we are also working with the UKs second biggest fringe festival BEDFRINGE, adding it to their already massive line up of music, comedy and theatre throughout July.

The multi platinum selling band have 6 top ten albums to their name (including two number one albums 1977 & Free All Angels) and they’ve spawned probably more huge singles than you can actually remember. Looking back over their back catalogue it’s actually unbelievable how many big tracks they’ve put out including Girl from Mars, Oh Yeah, Shining Light, Burn Baby Burn, Goldfinger, Numbskull, Sometimes, Candy, A life less ordinary, Envy, Jack names the planets just to name a few

This is our big show for the summer and we expect tickets to be snapped up quick. After show party to be announced nearer the time – book your Wednesday off work now!

Support comes from Cambridge garage rick band Violet Bones and the ever so cool, just out of nappies Dolomite Minor, a 2 piece playing some seriously good blues infused rock & roll.

14+ only. 14s to 15s must be accompanied by an adult. No refunds will be given for incorrectly booked tickets.

Tickets are £15 advance and go on sale on Wednesday 1st May from:

This is an all ages standing show, plus limited seating on the balcony
Under 16s to be accompanied by an adult