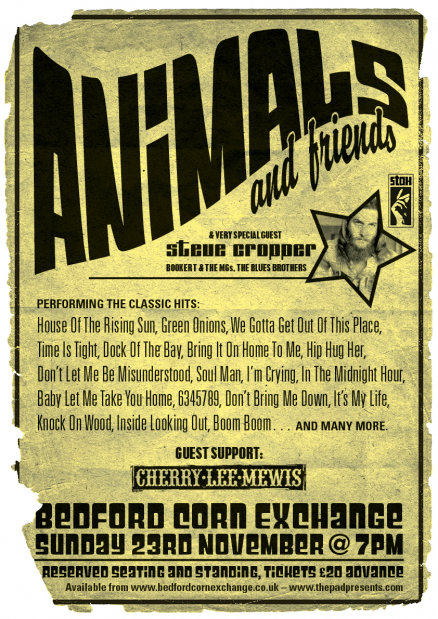 Animals:  The Animals were one of the most important British bands of the 1960s. The group is widely considered the raunchiest, the dirtiest, and the most authentic and uncompromisingly raw band of their time. Formed in Newcastle-Upon-Tyne, the Animals reflected their earthy upbringing with hard-charging, blues-based rock ‘n roll, deriving much of their early repertoire from American Blues and R&B sources – including (though they barely knew it) from Steve Cropper himself.

The Animals’ career took off in January 1964. With the release of House of the Rising Sun later that year, the Animals became the first British group after the Beatles to chart a Number One single in the USA. Their brooding arrangement of House of the Rising Sun – a traditional folk song recorded by Josh White and Bob Dylan became an early milestone in the British Invasion of the USA.

House of the Rising Sun topped the American and British charts. In fact, it stayed at #1 in the U.S. for three weeks – longer than any single since the Beatles’ Can’t Buy Me Love held down the top spot a half-year earlier. The Animals followed House of the Rising Sun with seven more massive hits, at least four of which – Don’t Let Me Be Misunderstood, We Gotta Get out of This Place, It’s My Life and Don’t Bring Me Down – remain classics of the era.

Original drummer John Steel and Mickey Gallagher, post-Alan Price pianist (also in The Blockheads since 1977 and Ex Clash) lead the band that joins Steve Cropper for this monumental set of classic original songs from an era that will never be repeated.

Steve Cropper:  As a guitarist, A & R man, engineer, producer, songwriting partner of Otis Redding, Eddie Floyd and a dozen others and founding member of both Booker T. and the MG’s and The Mar-Keys, Steve Cropper was literally involved in every single record issued by Stax Records from the autumn of 1961 through year end 1970. Such credits assure Cropper of an honored place in the soul music hall of fame.

As co-writer of (Sittin’ On) The Dock of the Bay, Knock on Wood and In the Midnight Hour, Steve Cropper is in line for music immortality.

Perhaps the ultimate testament to Steve Cropper’s immense contribution to popular music over the last four decades was his ranking by Mojo Magazine as the number two guitarist of all-time (Jimi Hendrix was number one). And in 2003, Rolling Stone magazine readers voted him among the Top 100 Guitar Players of all-time.

As impressive as that is, Steve Cropper’s legacy as a solo artist, member of Booker T. and the MG’s and The Blues Brothers, session musician and producer is far from complete.  The 2014 tour wll see the band playing all the classic hits they have been involved along the way including: House Of The Rising Sun, Green Onions, We Gotta Get Out Of This Place, Time Is Tight, It’s My Life, Dock Of The Bay, Bring It On Home To Me, Hip Hug Her, Don’t Let Me Be Misunderstood, Soul Man, I’m Crying, In The Midnight Hour, Baby Let Me Take You Home, 6345789, Don’t Bring Me Down, Knock On Wood, Inside Looking Out, Boom Boom and many more.

The band will be playing 2 sets with an interval and special first on support comes from Cherry Lee Mewis.

The show is fully seated in the auditorium with a limited standing & dance space in the side wings of the venue, tickets on sale priced £20 on sale 18th Feb.