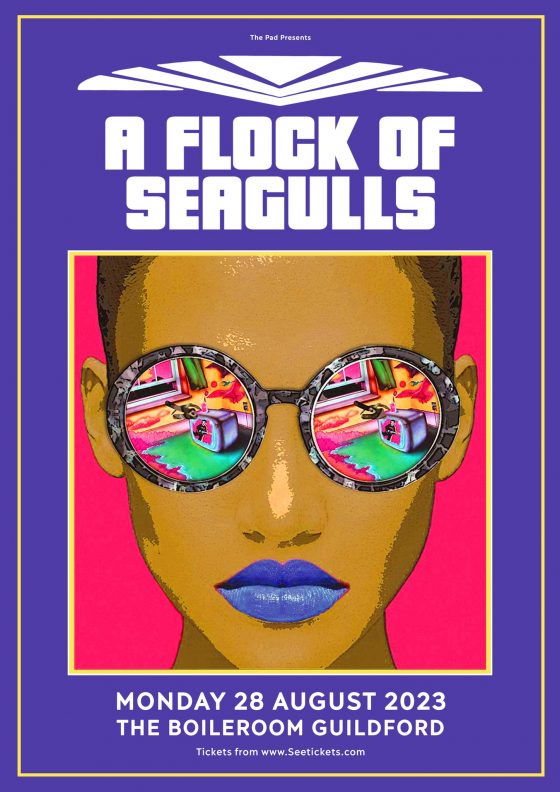 A Flock Of Seagulls + Guests

A FLOCK OF SEAGULLS + Guests

Very pleased to announce that as part of their UK tour we have secured a rare date with 80’s futuristic legends A FLOCK OF SEAGULLS at The Boileroom on Bank Holiday Monday 28th August 2023.

A Flock of Seagulls was started by Mike Score and his brother Ali in 1979 in Liverpool. Mike, who was previously a hairdresser, played keyboards, guitar, and vocals, Ali played drums and their friend Frank Maudsley played bass. The band took their name from a line in the song “Toiler on the Sea” by The Stranglers, which appears on their album Black and White. The band added guitarist Willie Woo, and Mark Edmondson joined briefly when Ali and Mike had a falling out; however, Ali re-joined when Mark took ill. They then began writing songs. Soon after, Willie left, allowing Paul Reynolds to join. They then started playing clubs and eventually got a recording contract.

The group released an EP and a couple of singles, It’s Not Me Talking and Telecommunication on Bill Nelson’s ‘Cocteau’ label; both tracks produced by Nelson. In 1982 the group’s third single, produced by Mike Howlett I Ran (So Far Away) became a worldwide hit, most notably reaching number 1 in Australia and the top 10 in the US and New Zealand (where the band became popular). The parent album A Flock of Seagulls and another single Space Age Love Song were also successful. In late 1982 the band found major success in their home country with Wishing (If I Had a Photograph of You) (first single from their next album) which reached the top 10. As it turned out, 1982 would prove to be the peak year of their commercial and critical success both at home and more notably in the USA. The band is regarded as breaking the ground for other musical acts during the advent of the video music area through MTV.

1983 saw the release of three singles to back their second album Listen. Each was only a minor success in the UK and abroad. The album bore a heavily processed electronic sound that was a break from the Duran Duran guitar and bass driven sound of their début. The band returned with a third album in 1984 that leant closer to a guitar sound. The More You Live, the More You Love was The Story of a Young Heart’s lead single. It was successful, despite having production that recalled their breakout hit ‘I Ran’.

Although parodied in later years, the band is now recognized as a pioneering act, capturing the zeitgeist of their time, particularly with multi-layered hits such as Space Age Love Song, Telecommunication and Modern Love is Automatic.

Massive success in the USA has kept A FLOCK OF SEAGULLS Stateside over the years with the UK very often overlooked on the touring front so to secure a show at The Boileroom is great news for the venue and the legion of the bands fans.